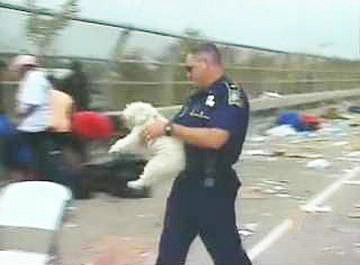 The PETS Act was initiated in the aftermath of Hurricane Katrina when the abandonment of many thousands of pets and other animals brought the matter of animal welfare to national attention. The bill's primary proposer, Tom Lantos, indicated that a press picture of a child being separated from his dog was the bill's catalyst:

“The dog was taken away from this little boy, and to watch his face was a singularly revealing and tragic experience. This legislation was born at that moment.”

On the congressional record for the bill, he explained more fully:

“The scene from New Orleans of a 9-year-old boy crying because he was not allowed to take his little white dog Snowball was too much to bear. Personally, I know I wouldn’t have been able to leave my little white dog Masko to a fate of almost certain death. As I watched the images of the heartbreaking choices the gulf residents had to make, I was moved to find a way to prevent this from ever happening again.”

(PETS) was a bi-partisan initiative in the United States House of Representatives to require states seeking FEMA assistance to accommodate pets and service animals in their plans for evacuating residents facing disasters. Introduced by Congressmen Tom Lantos (D-California) and Christopher Shays (D-Connecticut) on September 22, 2005, the bill passed the House of Representatives on May 22, 2006 by a margin of 349 to 29. Technically an amendment to the Stafford Act, it was signed into law by President George W. Bush on October 6, 2006. The bill is now Public Law 109-308.

In order to qualify for Federal Emergency Management Agency (FEMA) funding, a city or state is required to submit a plan detailing its disaster preparedness program. The PETS Act requires that the state and local emergency preparedness authorities include how they will accommodate households with pets or service animals when presenting these plans to FEMA. The final bill also contains provisions to help with disaster planning, such as:

Choosing a designated caregiver requires considerable time and thought. A temporary caregiver should be someone who lives close to your residence. He or she should be an individual who is generally home during the day while you are at work, unable to return home, and who has easy access to your house. A set of keys should be given to this trusted individual. This may work well with neighbors who have pets of their own—you may even swap responsibilities, depending upon who has accessibility.

When a disaster threatens or occurs, it’s the responsibility of local government authorities to respond to the scene to minimize suffering and protect life and property.

When additional assistance is required and requested by local government authorities, the Governor will direct designated state agencies and volunteer service organizations to provide resources and services needed to minimize the effects of disaster.

When the situation is beyond the state’s capability, the Governor may request assistance from the federal government to supplement state and local relief efforts by requesting that the President of the United States declare a "Major" Disaster or an "Emergency" in accordance with Public Law 93-288.

This plan, when properly implemented, will bring to bear the full resources of the state as required to meet the needs of local and state disaster operations.

FEMA, a federal agency since 1979, joined the Department of Homeland Security on March 1, 2003. FEMA's mission is to lead the effort to prepare the nation for all potential disasters and to manage the federal response and recovery efforts following any national incident — whether natural or man-made. FEMA responds only when a disaster overwhelms a state's resources and the governor requests federal help.

In January of 2007, the Animal Issues Working Group was convened under the aegis of the Department of Homeland Security (DHS). It is comprised of Federal, State, Local and non-governmental experts in animal response and emergency management.

Their charge was to revise the National Response Plan (NRP)* to include companion animal and service animal issues and address the critical need for comprehensive inclusion of all animal issues.

Revision of the NRP must take into account that the previously existing Stafford Act has been amended by passage of the PETS (Pets Evacuation Transportation Standards) Act. This requires state and local disaster preparation to specifically address animal issues. The NRP must take into consideration the impact of the PETS Act on local and national incident response.

Their key ideas focus on:

The Animal Issues Working Group reminds us that like all disaster response, animal-related response and recovery is most effective when handled at the local level by local resources.