The only President of the American Kennel Club who was a physician was the seventh, Dr. John Emmons de Mund (pictured). His term lasted from 1923 to 1932. Documents of that time refer to his uncommon decisiveness and energy. With his help, the AKC managed to survive the first terrible years of the Depression without disaster.

Dr. De Mund was also prominent in a significant court case initiated by the AKC while he was President. It sued an Illinois organization calling itself The American Kennel Club. The defense was that the New York charter of the AKC (which had been secured with the foresight of August Belmont, Jr.) was valid in New York, but nowhere else. The Illinois court found for The American Kennel Club in 1924; it enjoined the Illinois organization from imitating The American Kennel Club in any way, including the use of its initials, seal, and certificates. This landmark decision confirmed the legal right of the AKC to regulate the registration and showing of purebred dogs all over the United States.

John E. De Mund was born in 1866 in the village of New Utrecht, now part of Brooklyn, New York. His father, Dr. Frederick Cornell De Mund, was also a well known physician. The son was graduated from Rutgers College and from the College of Physicians and Surgeons of Columbia University. He practiced medicine between 1890 and 1912. For some years, he was a member of the staff of the New York Eye and Ear Hospital, as an otolaryngologist.

In 1912, Dr. De Mund retired from medical practice to devote himself to his other interests, particularly purebred dogs and yachting. He was a delegate of the Russian Wolfhound (later known as the Borzoi) Club of America for many years. He was second Vice-President and first Vice President of the AKC before becoming President. As Chairman of the Brooklyn Yacht Club, Dr. De Mund sponsored one of the first-long distance ocean races for small craft. He himself sailed several times on the American challengers in the Lipton Cup yachting races.

A startling cloak-and-dagger touch is added to Dr. De Mund’s biography by his activity during World War l: he was a secret agent for the United States Department of Justice. He died on November 11, 1933, of a heart attack. He was survived by his wife, Elizabeth Little De Mund.

From the AKC Gazette Russian Wolfhound Club of America Column 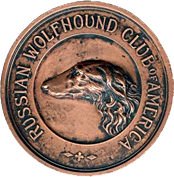 While the dog world, at large, no doubt feels a great loss in the recent, sudden death of Dr. John E. de Mund, it is the Russian Wolfhound Club of America to which the passing of this splendid sportsman means the most. He was one of the three men who founded the American club to look after the interests of the noble borzoi in December of 1903, and throughout the three decades, he gave freely of his advice and encouragement in the affairs of this organization. Dr. de Mund served as president of the club for the first six years, and held that office, off and on, up until the time of his death. For many years he has been the delegate of our Club to The American Kennel Club. 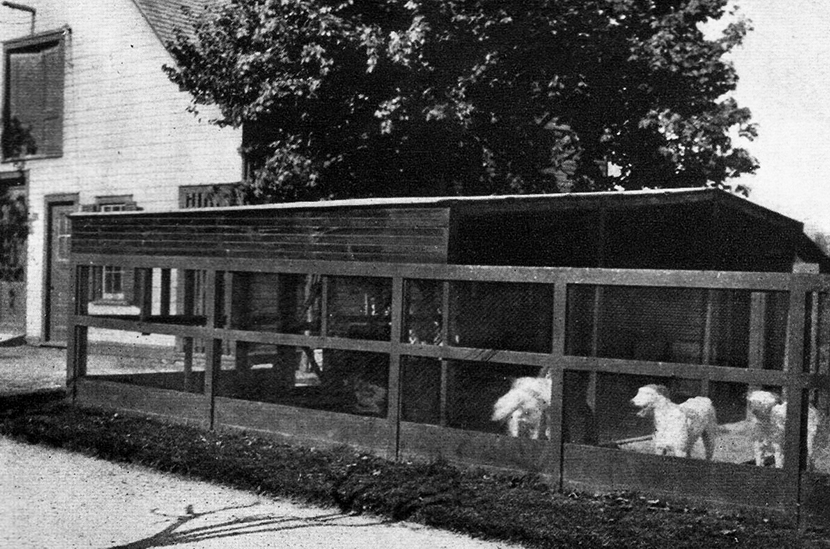 The Lorraine Kennels of Dr. de Mund bred and exhibited some of the greatest specimens of Russian wolfhounds that we ever have had in this country. The book of champions contains the names of a great number of his dogs. While he had many notable ones, perhaps the greatest of all was his home-bred specimen, Ch. Lorraine’s Pontiac, which among other honors, went to winners dog at Westminster in 1911. Among his other notable ones were Ch. Zoraida, winners bitch at Westminster in 1908, and Ch. Belkis, which took a similar honor in 1910.

When Dr. de Mund became an officer of The American Kennel Club, he retired from the game as a breeder and exhibitor, but he never relinquished his interest in his favorite breed. He long was one of the keenest judges of Borzoi in the world. Yet, these are not the things that make us all feel his loss so keenly; it is, rather, his friendliness and many kindness that will be missed so much—Russian Wolfhound Club of America.

Born in England in 1842, James Mortimer was one of the founders of the Russian Wolfhound Club officially recognized in 1904. In 1885, he became Superintendent of the Westminster dog show until his death in 1915. Although there are no records found that he ever owned a Borzoi, his prominence and knowledge of the dog world was so well respected, that it is no surprise to see his name as one of the founding fathers of this club. The Best in Show trophy for the Westminster Kennel Club is still given in the memory of this great man.

Dear Sir,
It is my duty and pleasure to inform you that at a meeting held at the Brooklyn Bench Show, Thursday, November 12, 1903, the exhibitors and others interested in the Russian Wolfhound, organized a Specialty Club for the amelioration of the breed, to be known as the “Russian Wolfhound Club of America.” An Executive Committee, consisting of Dr. J. E. de Mund and James Mortimer, together with the undersigned, was appointed to frame a Constitution and Standard, to be passed upon by the Club at a meeting to be held at Madison Square Garden at 9 o’clock P.M., Wednesday, February 10, 1904, during the show of the Westminster Kennel Club. The purpose of the Club is to place the Russian Wolfhound, both as a working dog and as a “chien de luxe,” first in popular esteem among the larger breeds of dogs. To this end, better classification and special prizes from this and foreign countries are already being arranged for the winter shows.
Applications for membership will be gladly received by
Yours very sincerely,
Joseph B. Thomas, Jr., Secretary 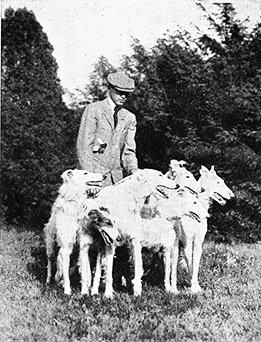 The originator of the most famous affix in American Borzoi history, Joseph B Thomas who registered his Valley Farm Kennel in 1901, also inspired a small group of Borzoi owners to organize the national breed club. Although his Valley Farm hounds had won many honors breeding, exhibiting and coursing beginning in 1889, Mr. Thomas was convinced that the judging of the breed was inclined to be erratic due to the ignorance of most people regarding the qualities that constitute a good Borzoi. He recognized that there was a great need of a recorded Standard of Perfection to guide judges, show committees and breeders in their efforts to improve the breed and maintain the points of excellence already achieved. With this goal in mind a meeting was held at the Brooklyn Bench Show on November 12 1903 at which an executive committee consisting of Mr. Thomas, Dr. John de Mund and James Mortimer was appointed to draft a Constitution and Standard to be voted upon by the Club at a meeting scheduled for February 10, 1904 at Madison Square Garden.

Mr. Thomas’s love for Borzoi inspired his search for quality stock throughout the United States, Canada and Europe. However it was in Russia that he found and imported stock directly out of the Perchino Kennels of H.I.H. Grand Duke Nicholas that led to the dominance of the Borzoi from the Valley Farm Kennel continuing through today’s bloodlines.

The Valley Farm Kennel name was registered with the American Kennel Club in December 1901 with Joseph B Thomas as owner. However, Valley Farm was actually owned by a syndicate made up of Joseph Thomas, Ralph H. Thomas, A Douglas Dodge, Howard H. Mossman and Chauncey J. Hanlin. Mr. Mowbray M. Palmer acted as secretary until 1915 when Mr. Thomas retired from an active part in the Borzoi world and transferred the kennel and registered name to him. Miss Lois Kellogg became a partner in 1921 which lasted until 1929 when Valley Farm was again transferred solely to Mr. Palmer while Miss Kellogg went on to establish her own kennel of Perchina. Mr. Palmer was the sole owner until his death in 1932 at which time the ownership of the name went to Mrs. E. T. Biesel.